Storage is a vital part of any computer.

Think about it: where do documents go on your computer if you have no more storage? Thankfully, storage options have gotten quite a bit cheaper over the years. HDD, or hard-disc drives, are not always reliable. You don’t want your hard drive to fail on you, right?

In that case, getting yourself an SSD, or solid-state drive, is one of the best options in computing today. Instead of the traditional, spinning disc that information gets written to, an SSD has no moving parts. It’s all based on flash storage, the same type found in your smartphone or tablet.

Of course, the main reason to upgrade is improving your computer, as SSD’s have many benefits. Any SSD will be faster in doing things, from simply booting up the computer to running any software. The other nice feature of having an SSD in your computer is from failure rate. Since there are no moving parts, the failure rate of any SSD is slim-to-none.

Basically, you have nothing to lose from upgrading, or starting out with, an SSD. The only drawback is price, as 1TB SSD’s can be expensive. Again, you’re investing in better performance and less headaches, with all your memories backed up.

You can’t put a price on that.

There are Different Types of 1TB SSDs

Before diving into our actual list, you should know that there are different ways of connecting an SSD to your computer, which can affect speeds.

First up is the standard SATA. This is the same format that’s still found to connect HDDs alike. This also means, since it’s stuck on older, slower technology, the technology is the slowest. That doesn’t mean they’re not popular, though, especially with bigger options like 1TB SSDs.

Second, we have M.2 PCIe, which is a newer technology. The best thing about this type of SSD is its size. These sticks of storage space generally measure 22mm by 80mm, making them easy to plug-in and play.

The other benefit to M.2 PCIe is the speed. Most of the time, PCIe drives can run a solid 3-times faster than their SATA counterparts. Plus, they’re often more reliable than SATA. This allows you to rest easy whenever saving or running documents. The benefits are there, but often come with a cost.

Lastly, if you’re looking for the best technology available, an add-in card SSD should be on your list. These work just like graphic or sound cards, meaning you plug them into the slots on the back of your computer. What makes these special that these are the fastest, yet most expensive, SSDs you'll find in today's market.

It's hard not to want one, as the technology is very impressive, but depending upon your needs it may not be the best choice. But, if the ultimate speed is your mission, there is no option better than a full, add-in card.

One other point: knowing a manufacturer’s warranty information should influence your choice. Failure rate isn’t high on SSDs, but it can happen, so knowing the policies in place can ease any potential pain. It seems odd to have only four options as our best, but we’ve picked the overall winner from each connection type, along with an extra for good measure, to determine the true best of the best.

So, what's tops the ranks as far as 1TB SSDs are concerned? Let's find out.

This drive could easily be number one, but the exuberant price tide at nearly $1,300 puts it out of reach for most consumers. This means that, instead of being the best on our list, the Intel Optane 905P hangs back as the first you see.

Without going too much into the numbers aspect, the sequential read and write speeds sit at 2,600 and 2,200 MB/s. The random read and write speeds set at 575,000 and 550,000 IOPS, respectively. While the former numbers can be passed by other flash-based storage options, the 905P shines in random tasks, which is the majority of what you’ll be doing on your computer.

Another nice feature of the 905P is that it allows the you to customize the lighting effects. While this seems like an interesting choice for some, you might find it to be an awesome addition. If you're the type of person that's putting this into your PC, the extra function of personal style is nice. 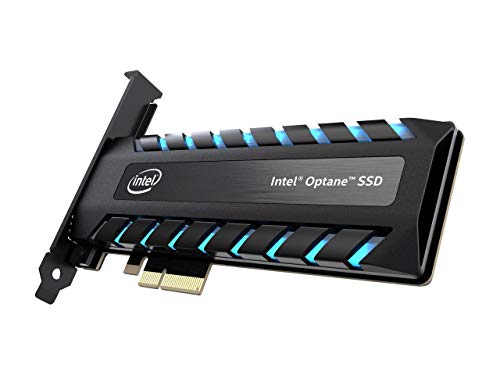 Speaking of customizing, Intel's SSD software makes it simple to customize and run the device once installed, which makes for a nice user experience. This is important, as not all SSB use come with software to run them. You might think that, because it’s just a storage device you shouldn’t need software when installing. That is true, but the software can come in handy.

It’s easy to install something, generally, but not as easy as to diagnose a problem. This is where the software can come in handy, and Intel does it right. It's easy to use, fast, and doesn't take a lot of room on your flashy new SSD.

While it remains to be seen if this add-in card technology will be adopted by more users, it's still be best performance ratio you can find in today's market. It’s the pinnacle of 1TB SSDs.

While the little-sibling 860 Pro is found further down our list, the bigger, faster, and more expensive 970 Pro is a force to be reckoned with. If price is no concern, this is the best M.2 PCIe 1TB SSD you’ll find.

When considering the performance of this SSD, you’ll find that the 970 Pro is ready to work. Featuring sequential write and read speeds of 2,700 and 3,500 MB/s and random speeds at 500,000 IOPS, this is no slouch of a machine. All this speed will come in handy for professional users that need those big numbers for sustained production. The public, though, won’t.

Endurance wise, which basically represents the amount of life a drive has, sits at 1,200TB. This is a monster number, which is the best in the class. It allows any user the ability to do as much work as necessary when using this SSD, without worrying about failure over time. It’s unlikely that you’d hit that rate in a few years’ time, anyway. 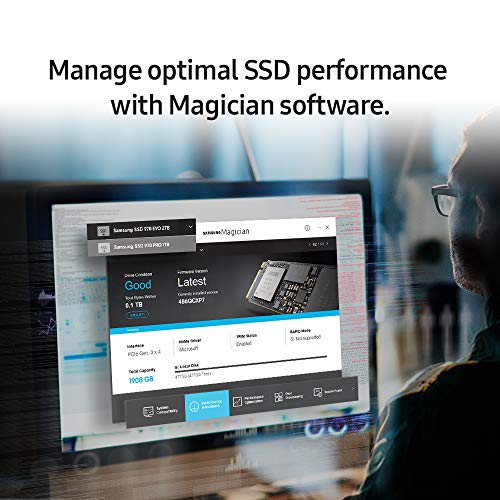 Just like other Samsung drives, you’ll be able to encrypt the full disk itself, ensuring the maximum security. On top of the great performance, it’s nice to see companies backing up their drives with software that protects your data.

All 1TB SSDs are going to cost a little bit more than certain storage drives, but the 970 Pro is up there at around $625. Again, you know what you’re getting here: the quality, consistency, and performance. 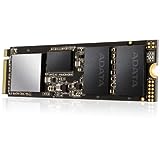 While the name is a mouthful to say, Adata’s newest SSD, the XPG SX8200 provides a great price-to-performance ratio in the SSD market. It’s Adata’s premium line, yet still costs considerably less than the Samsung 970 Pro.

Raw performance metrics show the sequential read and write speeds of 3,200 and 1,700 MB/s, with random performance hitting 310,000 and 280,000 IOPS. One interesting point about the SX8200 is that it provisions memory for larger population tasks. This is standard policy with HDDs, and is why you see certain drives rated for a certain storage number but deliver less.

The endurance is rated at 640TB, which is good, but not up to true professional use. Adata stands behind their products with a full five-year warranty in case of any failures to the drive. Five years is the industry standard, so this is good. 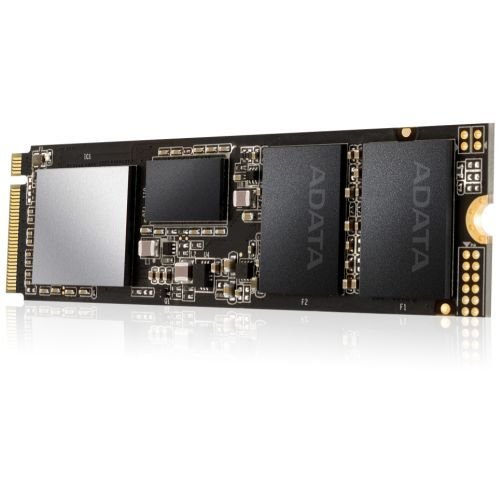 The included software is also standard, with encryption and monitoring programs, plus the added bonuses of cloning data from an existing drive to the Adata. You won’t believe how frustrating it can be to move data from one drive to another, and this alleviates that.

As far as 1TB SSDs are concerned, the M.2 PCIe-connected Adata XPG SX8200 is one of the better ones you’ll find. Between the stellar price point and solid performance, there isn’t much more to ask from an SSD.

It seems weird to have Samsung as one of the top SSD manufacturers on the market, but here they are.

The 860 Pro represents a reliable, fast, and cheap SSD you can find, be it for professional or standard everyday use. Speed wise, you’re looking at 560 and 530 MB/s for sequential read and write speeds, along with 100,000 and 90,000 IOPS per random tasks.

You might remember the first two choices were quite a bit faster above, but those are some of the most expensive PC accessories you can buy non-commercially. The Samsung 860 Pro represents a good balance.

While most people won't dive into the technology that powers the Evo 860, Samsung has essentially, increase the output power of their popular 850 Pro line, all while adding in better overall speeds. Another benefit to the 860 Pro is efficiency. The company has cut down on energy usage by about 35% for their newest SSD, which can be a big factor. Power is always a touchy subject, especially with certain HDDs, but SSDs use less. Thus, it’s not much of an issue. 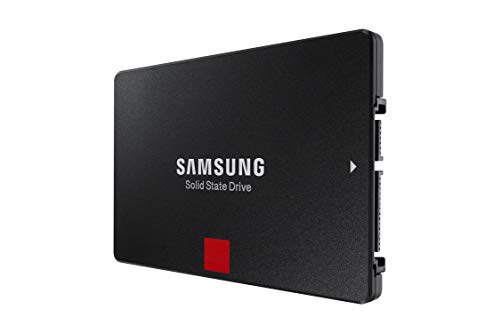 Two other features can be found underneath the hood of the new 860 Pro. First, you’ll be able to use this SSD in NAS–or network accessible storage–setups. This isn't a big deal to most users, but the small percentage that will use it in a network-heavy environment will come to appreciate these speeds and reliability that Samsung has designed. The second feature is that there is encryption software built-in. This means that, if you are the type that needs to secure their data on a drive, you’re in luck.

Also, this time around Samsung gives Linux users access to be 860 Pros capabilities, unlike their previous 1TB SSDs. Again, while this isn’t something everyone is going to find useful, it’s something to note. The 860 Pro gives you the performance of a high-quality SSD connected by SATA, making it smooth to operate and easy to install.

Overall, this is the best of any 1TB SSDs you’ll find today and sits at a comfortable price less than $500.

1TB SSDs Provide an Upgrade into the Future

It seems like only yesterday that we were using floppy disks to store our data, with so little of it able to be stored.

Now, we have huge, 12TB containers that can hold more movies or photos than we even know what to deal with. Of course, having access to all of that hurts performance, typically coming from an HDD. Enter the SSDs, where powerful, energy-efficient devices can hold your files, all with less of a chance to fail or die.

It’s no secret that using an SSD is a benefit, and to get the most out of any drive you’ll need to choose one that is big enough to hold a good amount of data. 1TB is the going rate for solid document-keeping abilities, which is what our list is based on.

Any SSD will provide more than your HDD can, but the different types that are available can be confusing. Knowing the type of connection you want, and use, can be a big boost to picking the best drive for you, and your wallet. Often, the best will cost more, but that doesn’t mean you need to buy it.

Remember, whenever you upgrade anything you have it should be for futureproofing yourself. An SSD can do just that.