Are you a gamer?

Better yet, do you want to be?

It’s one of the biggest-growing entertainment media around, and gaming only looks to get stronger. One of the best ways to game is through a Windows PC. The freedom a Windows-based machine offers is second to none, and most of the popular games are better optimized through there.

Sometimes, though, getting into gaming can be difficult. Often, there are numerous computers to choose from, and the desktops can be big, bulky, and not-so-beautiful. This means it can be confusing if you just want something you can play a simple shooter game on.

What if we tell you that you can game on a laptop, where the screen and everything you need is already optimized for gaming purpose? Plus, with a higher-end computer, you often get nice perks across the board.

One of the best in the business is Alienware. Made by Dell, one of the world’s largest and most trusted PC manufacturers, Alienware laptops provide the perfect means to game on-the-go, with little features that go a long way.

If you’re looking for a new laptop, or maybe your first gaming machine, consider Alienware as the perfect partner.

What Goes into an Alienware Laptop? 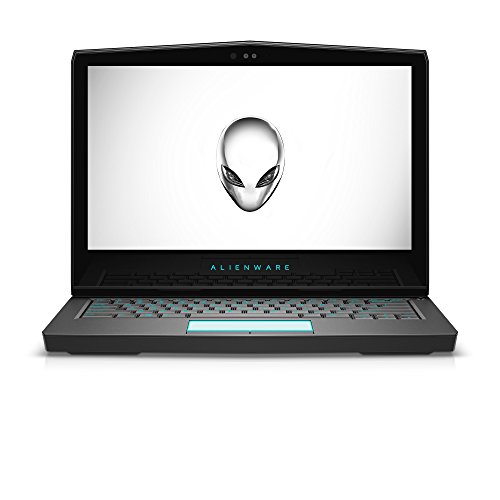 With most gaming-oriented hardware, there is a lot of power under the hood.

One of the best things about an Alienware laptop is that you get Dell’s warranty built-in. This means that, if anything should go wrong within the first two years, the computer is covered by the warranty. That’s nice, as many manufacturers, especially ones with gaming hardware, forgo warranties, as gaming can be tough on a machine. 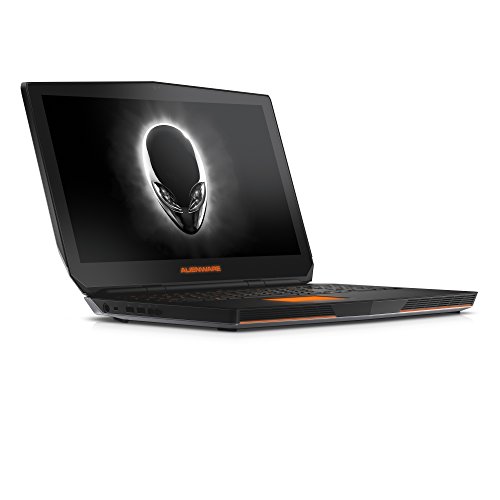 Alienware is built to be a gaming centerpiece, so they know what the laptop needs versus what’s fluff. Often, you’ll get machines built from the ground up to handle heavy tasks. 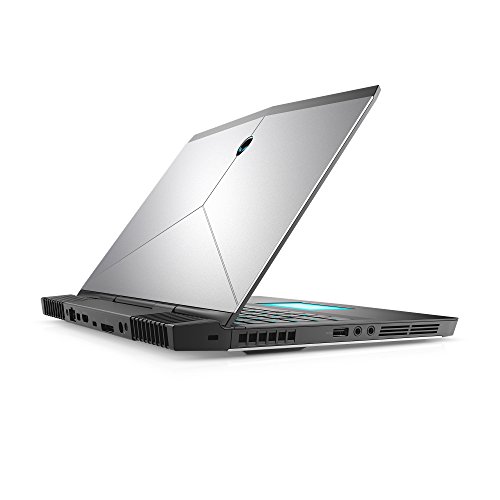 But which ones are the best? The biggest factor in determining the best gaming hardware made by Alienware is price and weight. You’ll be able to distinguish the little features, such as high-end graphics cards, lighting, or processor upgrades. These combine into the price and class of laptop, be it 13, 15, or 17 inches, leaving it ultimately up to you to pick the best for your needs. If you’re concerned with looks, though, all of the Alienware laptops will share the same outer shell design and software, ensuring the biggest differences are under the hood.

Today, we’ll go through our picks for the best offerings the company has.

Our Choices for Top Alienware Hardware 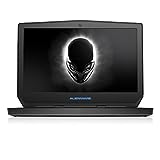 Starting off the list is a perfectly adequate laptop that will give you great performance across the board.

The Alienware 13 is the smallest offered gaming laptop by the company, making it both the lightest and easiest to carry around. Some may find the screen too small to feel the full experience of any games being played, but really, it’s more of a nitpick than anything.

Under the chassis, this Alienware laptop packs the 7th generation Intel Core i7-7700HQ processor, which is more than enough for many applications. If possible, getting the newer, 8th generation Intel Core i7-8700 is preferred due to six cores instead of four, but since the processor only relies on two cores when gaming, the results are negligible for gaming purposes.

For the other hardware, there is an included NVIDIA GeForce GTX 1060 with 6GB of GDDR5 VRAM. This is one of the best mid-tier cards out there, providing 60 frames per second for almost any title at 1080p quality. Even though most games can surpass the video card, the performance here for the price is superb. Most gamers will even find that the GTX 1060 can run lower quality games at higher frame rates.

However, if you’d like to take the game up a notch, the QHD 1440p OLED display awaits. This upgraded display is often hard to find in laptops, as most choose the lower-end FHD 1080p panels. Not this time, though.

All of this is available in a package that costs $1699. Note that, while that is a good chunk of change, you’re paying for the Alienware laptop quality, along with the hardware and Dell warranty. It’s a pretty good deal overall, and if you wait for sales you might be able to find the computer even cheaper.

You could also consider a refurbished model, which is certified by Dell, and still includes the standard warranty. 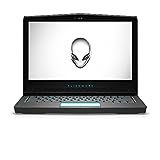 If you thought to yourself that a price starting from $1699 was a tad much, stepping down your gear to the lower-end Alienware 13 will still suffice most people’s needs.

Even though some might say you’re “only” getting a 7th generation Intel Core i5-7300HQ, it’s just one step down from the aforementioned Core i7, and still has quad-core capabilities. It’s slightly slower at the Turbo Boost-powered 3.5GHz, but this will be more than enough performance for all gaming applications for years to come. You’ll also have a good brain to backup other tasks, if that’s your fancy, too.

The other drawback to this model is the included NVIDIA GeForce GTX 1050 with 4GB of VRAM. It sounds worse on paper, and technically it is a slower graphics card, but again, everything comes back to price versus performance, and if you’re looking for the ultimate balance the GTX 1050 is more than enough. You’ll be able to run games like Battlefield 1 and Overwatch at 44 frames per second and 60 frames per second, respectively. If you’re just starting your PC-gaming journey, this will still feel quite a bit better than any console had before it.

The display found on this variant is a standard HD 720p TN Anti-Glare display, and while video purists may find it too dull overall, the screen handles games well. Thankfully, this is only found in the 13-inch models, because if you were to find a 720p screen with bigger real estate the pixels can start to look stretched. This is only apparent outside of gaming applications, though, so keep that in mind.

There’s 8GB of RAM available for multitasking, which is sufficient, but 16GB is really the gold standard nowadays. One thing to consider, though, is the hard drive: this version comes with a 256GB SSD, or solid-state drive, which is quite a bit faster than your standard hard drive, but will hold less storage.

If you’re looking for the weight and size, just know the laptop clock in at 5.8 pounds, which sounds like a lot, but graphics cards aren’t light. 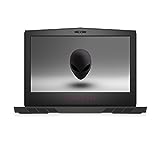 Looking for the best balance between the first and second picks on the list?

Enter the first 15-inch Alienware laptop on our list, the Alienware 15R3. This nicely made computer fuses the best of the previous two entries on the list, and adds in a bigger screen, without inflating the price.

To start, this laptop is powered by the 7th generation Intel Core i5-7300HQ. Again, it’s a quad-core variant, with enough power and potential to hold you over for a couple years of gaming bliss. This model also has 8GB of memory, or RAM, which should be good enough for all but the most demanding users.

The biggest differences, though, are in the video card, screen, and storage device.

The heavier Alienware laptops, generally, have a hard drive in them, rather than solid-state drive, and this is no different here. 1TB of storage is at your fingertips, which is plenty for gaming. In addition, the graphics card is the 100% faster NVIDIA GeForce GTX 1060 with 6GB of VRAM. You’ll notice a big increase in quality and refresh rate, which is important for most.

Meanwhile, the screen is an upgraded 15.6-inch FHD 1080p IPS Anti-Glare display, which provides better color accuracy, better viewing angles, and better brightness. Did we mention it’s a better screen? The one downfall of the bigger 15-inch laptop is the weight: overall, the hardware will weigh a hardy 7.6 pounds, almost two pounds heavier than its 13-inch sibling.

Remember, this list isn’t about the sleekest design though; it’s about the best Alienware laptops. So, the best part about this package is that it can be found for $1,291 new, or picked up for a mere $1,033 refurbished. 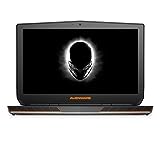 Looking to step up your game?

Check out this 17-inch , decked out Alienware laptop.

This big beast – coming in at 17 inches – has everything you could want. The latest, and greatest, 8th generation Intel Core i7-8750H power everything connected. What does Intel’s latest offering provide? Gone are the days of quad-core processing, as the newest Coffee Lake offerings give you six cores to use. That’s more than enough for gaming, of course.

There is 16GB of RAM standard, which the option to upgrade to a full 32GB set if you so desire. This is a feature that no other Alienware laptops have, and it’s due to the size of the machine. Speaking of space, since the laptop is so big, it houses both a solid-state drive and hard disk drive. The SSD is only 128GB, but it’s perfect for your Windows-based operating system. The 1TB HDD gives you ample space to store games, and more.

The screen is another upgrade, with a big, 17.3-inch display backed by FHD 1080p IPS Anti-Glare Screen, along with NVIDIA’s G-Sync technology. Harder to find in laptops, NVIDIA G-Sync calibrates the frames per second within a game to the graphics card to provide a smoother experience. Generally, it makes the product more expensive when included, but not here. This means you can run games with graphics settings cranked up without losing precious video fidelity.

Of course, the biggest draw of this machine is the bigger, and commanding, NVIDIA GeForce GTX 1070 OC with 8GB of VRAM. This is serious performance even for the most demanding games, and with the G-Sync technology this video card shouldn’t break a sweat. It’s not for everyone, but even if you’re not using the full power initially, having the power will come in handy in the future. The fact that you can crack open a game and push it to the limits, when wanted, makes it a wonderful pick.

The best part is that this machine won’t break the bank, at a reasonable $1799. Simply put, this is the greatest Alienware laptop around, and if you splurge on the bigger model it won’t be a decision you’ll regret.

It’s quite shocking just how much you can use your computer for these days.

From editing photos to splicing and creating movies, the whole concept of the computer is advancing faster than we know. Whether you’re a casual gamer or a hardcore enthusiast, there is a laptop for you on this list.

Differences often come in the form of dollar signs, and even though it’s hard to not get the best overall product, which is generally more expensive, it’s important to know of all the options you have. Dell makes the Alienware brand, so you know you’re getting a product that’s seen it’s fair share of tests.

If you’re in the market for a new laptop, but specifically one tailored towards gaming, these Alienware laptops are sure to fit any of your needs.