The ZenWatch 2 is the second iteration of Android wrist-wear from Asus, and it was first announced in 2014. The first ZenWatch showed flashy, even sleek, design elements and a price point that puts the Apple iWatch to shame. But the watch was missing that critical physical watch button, and Android Wear clearly was not ready for the spotlight.

Quick Navigation
Asus ZenWatch 2 Build and Design
Give the People What They Want: Gunmetal and Rose Gold
​Specifications
Asus Zenwatch 2 Screen
The Asus Zenwatch 2 Under the Hood
Battery Life and Water Resistance
And You Thought Apple was an Oligarchy...
Asus Zenwatch 2 Wrap-Up

Flash-forward to 2017, and the Zenwatch 2 tries to address the flaws of its predecessor, and, with its second slim, sexy watch offering in the Zenwatch line, we think it has a winner. Mind you, it is not perfect, but with 18 different straps and three different design versions to choose from, the Zenwatch 2 is back and better than ever. 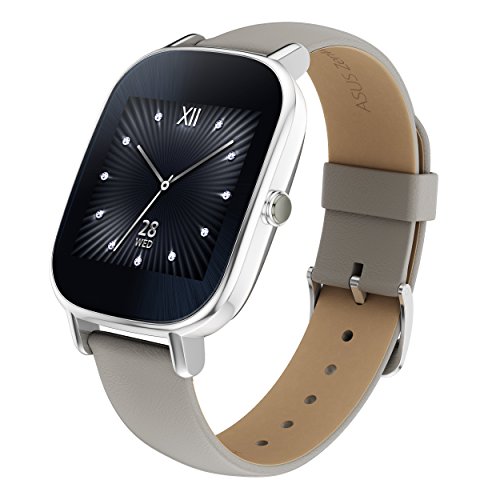 Asus maintains their popular rounded-square face promoted in their first generation of Zenwatches, and while the original model sported a 51mm x 39.9mm build, the Asus Zenwatch 2 is even a little more compact, offering two design choices, the larger of which is slimmer by a fraction, at 49.6mm x 40.7mm.

In terms of chunkiness, the ZenWatch 2 is actually thicker than the first model (9.4mm), weighing in at 10.9mm thick, while the smaller model is even more compact at 45.2mm x 37.2mm and 11.8mm thick. While it is great that the Zenwatch 2 has been able to shed some millimeters, it has yet to reach Apple Watch status.

The big version is also a heavyweight at 70g, compared to the most current larger version of the Nike+ Apple watch, weighing in at a mere 35g. The point of all of this is that you are more likely to feel the Asus watch when you are wearing it, though the Zenwatch 2 is still 5g less than its predecessor.

Give the People What They Want: Gunmetal and Rose Gold 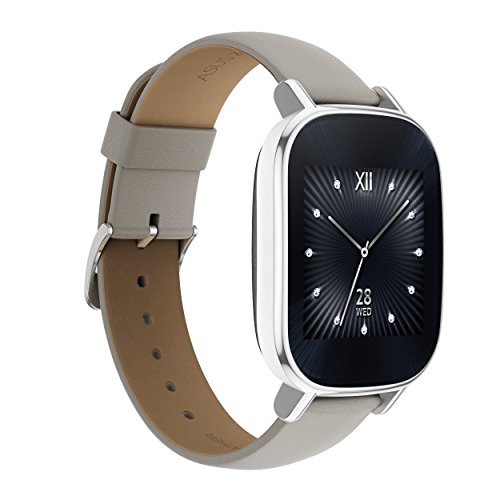 Maybe that is because of the Zenwatch 2 sports a very Apple-like stainless steel in gunmetal, silver, and rose gold finishes. Plus, the rounded Gorilla Glass looks very elegant and the extra weight on the Asus Zenwatch 2 makes it feel, perhaps, even more, sturdy than the Apple Watch.

Further, you can get different finishes on the watch body and the button, like a gunmetal version with rose gold watch button, which is something you can’t do with an Apple Watch. Plus, the strap variations provide the user with even more choice, in color, material, and even clasp type, and consumers have the option between 18mm and 22mm straps.

Asus has put a lot of thought into their design options and the build of the Zenwatch 2, providing a very Apple-like product at an even more affordable price point. Of course, if you are not into the rounded-square watch style than you may want to check out the Huawei Watch or the LG Watch Urbane, which are both round-face options.

But, all-in-all, Asus has learned from its missteps and offered consumers the power of choice stuffed into a sleek package that almost rivals the Apple Watch, except for one thing: the infamous bezel that frames the screen is huge. And, while, we may never see the bezel disappear entirely, it seems even more prominent on the Zenwatch 2, due to its slightly smaller design.

Still, the overall design is stylish enough to almost get past the bezel if you squint a little, but it's probably the most non-elegant element of the watch. Of course, the pixel-rich screen may make you forget about the bezel from time to time. 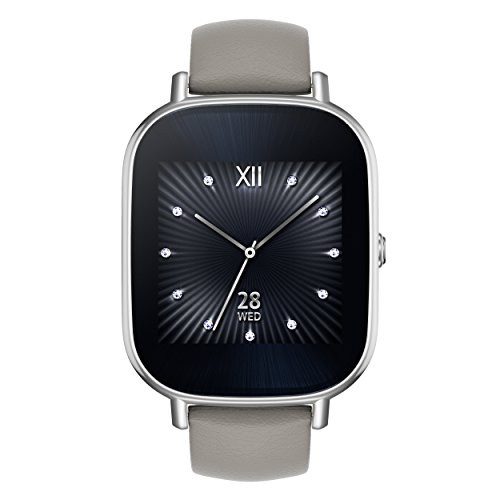 The Zenwatch 2 boasts a luxurious 320 x 320-pixel, 1.63-in watch screen at a 278 pixel per inch density, and content and icons appear vivid and crisp. The Zenwatch 2 almost matches the Apple Watch’s 1.65-inch 312 x 390-pixel density and uses the same Amoled screen as seen in the original Zenwatch, which helps one to look past the bezel.

Its pixel density and brightness are so good that one reviewer even claimed he had no issues using the Asus Zenwatch 2 in direct sunlight. Let’a face it, though, many Android Wear smartwatches perform quite similarly as they share the same OS platform and much of the same hardware under the hood. As a result, this arena of design ends up being where most smartwatch-makers have the ability to distinguish themselves from the pack.

And Asus has been one those watchmakers. Choosing to produce a watch made of high-quality stainless steel translates into a watch that is elegant durable, and the combination of metal and glass is a classic pairing. Also, Asus has chosen to augment that classic pairing by allowing consumers to choose from a variety of designs and watchbands.

It is also an important distinction that Asus has decided to go with two sizes, which helps increase marketing avenues and appeal to a greater audience, a trick Apple discover some time ago. The upshot is that instead of a one-size fits all watch, you now have a two-pronged product to market to the following demographics: men/women, children/adults, small/ large, etc.

The Asus Zenwatch 2 Under the Hood 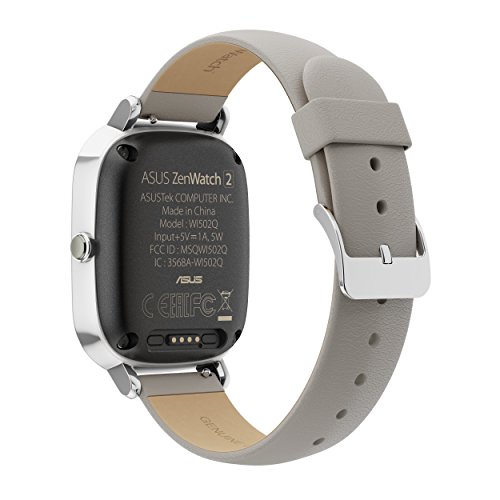 Under the hood, the Zenwatch 2 boasts a snappy Qualcomm Snapdragon 400 processor and 512MB RAM, which is nothing new and makes up the nuts and bolts of many Android Ware watches out there. It’s a pretty standard setup for a reason, and, with no obvious hurdles or hiccups with the UI, the smartwatch works, well, like clockwork.

One of the neat things about the Asus ZenWatch 2 is that not only can connect to your mobile device using Bluetooth 4.1 and a Wi-Fi connection, it can run independent of another mobile device, storing info internally until a connection can be re-established.

You’ll also find an available six-axis gyroscope to help pick up subtle wrist gestures, including what Asus calls its “quick look” view, activating vital watch info and brightening the screen as you bring the watch in for a closer look. Another ergonomic move was transitioning the power button from the back of the watch to the right side, which makes it far easier to manipulate and also allowed Asus to build in some additional functionality.

Pushing the power button once will turn the display off and on, and holding it down will activate a menu full of your contacts, applications, and a new Android app called Google Now, a precursor to the Google Assistant personal assistant software.

Of course, gestures rule in an advanced AI world, so Asus has built in an alternative method for turning off your display, which consists of tapping the watch face with the palm of your hand. This gesture reportedly works well, and, after a slight vibration on your wrist, the display will either shut down or go into sleep mode, depending on your settings. 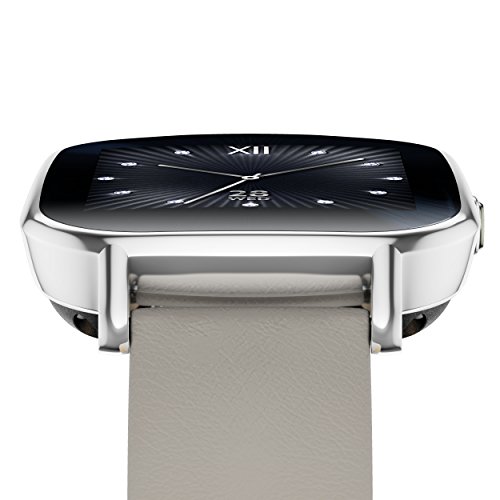 The larger Zenwatch 2 comes with a 400 mAh battery, and there is nothing new there, as much of the Andriod Ware fleet offers the same technology. In a bit of an odd turn, according to one review, the battery life doesn’t perform to its best until after the first few days of full charges.

At first, you will only get 10 hours or so of usable battery time, but, eventually, that will improve to more than 12 hours after a couple of charging cycles. Reportedly, the Zenwatch 2 is now charged via a magnetic pogo pin connector, and connecting and charging are both fast and easy, with the watch regaining a 50% charge in under 30 minutes.

If you are upright and facing the right way, you might notice, too, that the Asus Zenwatch 2 comes with a IP67 certification for water and dist resistance. This means that the watch gains complete protection from dust and will tolerate a 30-min dunk in 1 meter of water, for as long as 30 minutes. Under these conditions, you see no negative impact to your Zenwatch as long as the water is not saltwater.

And You Thought Apple was an Oligarchy...

Apple thoroughly vets any and all software available on their store. That means the OS and software on or associated with the Apple name cannot be changed, altered, or updated without Apple permission. And, while it is true the oligarchy created by the late King Jobs and his close crew members has resulted in an empire of exclusivity, it is not the only elitist game in town.

Google owns Android, and, with Brin, Page, and Schmidt at the top, it also owns the distribution of the OS and its apps. Like Apple, it does not allow its OS or distribution system to be manipulated in any way. The only differences between the two when it comes to exclusivity is that Apple produces both software and hardware products (exclusive to itself), and Google has only yet dabbled in producing its own hardware and licenses out its Android software.

So, when smartwatch-makers licenses the use of Android for their watches, it creates a very consistent (Apple-like) software experience across the board. Yet, it creates no space for individual Android Ware smartwatch makers to distinguish themselves in terms of unique software or OS revision. Good, bad, or indifferent, the polarizing effect this has on the availability of smartwatch variety is both positive and negative.

Moreover, while the market has revealed an array of different smartwatch designs by different manufacturers, the Android Wear watches, essentially, function all the same, as do the Apple Watch varieties. The result is that, as a consumer, you are basically making a choice between Apple or Google, regardless of manufacturer name. 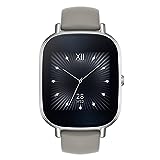 Asus has always made it a point to bring technology to the people at a very affordable price point, and, with the Zenwatch 3 having just come out, the cost of the Asus Zenwatch 2 just got even more affordable at around $240.

The Zenwatch 2 is not only affordable, though – it is designed with the elegance of an Apple Watch in mind, and, in fact, the two smartwatch options look suprisingly similar, the Apple Watch only having a slightly larger screen and being thinner and lighter. But the Zenwatch is a little more affordable, making it is a great option if you are just getting into the smartwatch game.

Great looks, customizable colors, bands, and the power of a new and improved Android system that features voice recognition, make this the leader of the Android Wear pack. So what if it doesn’t have a heart monitor yet? You can take it underwater, and that is something we do not recommend trying with the Apple Watch.