Below, you will find our list of the 10 best capture cards, ones that we think will make a big difference in your gaming experience. These cards offer a range of great features and capabilities for all types of gamers.

What is the Best Kind of PC for Gaming?

It shouldn't be surprising, but an open range gaming PC is often a good choice for streaming. But, there are hardware considerations for streaming that are a little bit different.

Typically, gaming setups are built around the GPU, with your graphics card often being the deciding factor in how nice your games will look, as long as the rest of your rig meets some kind of minimum threshold. But for streaming, your CPU can determine how your gameplay looks to your viewers, be they on Twitch, or another streaming platform.

But why is this? Well remember that the work of rendering the game - that is the act of actually creating the image - has already been done by your graphics card. It is then your CPU that takes that rendered image and transcodes it into a video format that can be easily sent over the Internet and displayed by your viewers’ web browsers. And if you've ever edited video regularly, you'll probably already know that having a more powerful CPU typically makes video encoding a much easier job.

Now since transcoding is easily split amongst multiple CPU cores (don't forget, you still have to run the game too), it is to your advantage to get a CPU with more cores and more threads, especially if you want to stream at 1080p, 60 fps instead of 720p.

Though it should be noted that as with anything, there is a point of diminishing returns, an 18-core processor might not be worth the extra price. If you want a specific recommendation, a modern six-core core I7 or more, or AMD rising 7 processor or better in your gaming rig should make it a very capable streaming machine.

Some streamers though decide to go a step further and use a second PC to handle all the streaming tasks, using their first rig strictly for actual gaming. This can especially make sense if you already have an older tower lying around, as it’s a great way to stream CPU intensive games like StarCraft or Total War without being concerned that your gameplay or your stream quality will suffer as a result.

One of the reasons this approach is so popular, is that your streaming PC doesn't have to be anything super fancy - you might not even need a dedicated graphics card. You will need a good CPU, but because it's going to be handling streaming only, you can probably get away with the more basic four core, four thread processor.

Just make sure that you close all your background programs and have only what you need to stream up and running if you're running into trouble.

The other thing you'll need for your dedicated streaming PC, is a way to capture the video output from your gaming machine and deliver it to the software that will encode and transmit your stream, along with any overlays and transitions that you desire.

For PC gamers, this can actually be done over your local network, using the NVNC hardware encoding engine behind Nvidia's Shadowplay feature to send up to a 60 Mb stream of the game over Ethernet to your secondary box, where CPU encoding will turn it into a high-quality 5.5 Mb stream, compatible with Twitch TV.

But if your PC hardware doesn't support this method, or if you are streaming from another device, like a game console, the go to is a capture card.

A modern USB 3 or PCI express capture card will help prevent transmission problems and lag, compared to a USB 2 capture card, but other than that, you'll probably have to read or watch reviews to determine exactly which model is best for your needs. Whatever you get though, make sure that it supports the resolution and frame rate that you want to broadcast.

How to Find Your Audience with Multi-Streaming

There are some truly fantastic benefits to using a service like Westream. The first and most obvious one is that it multiplies the platforms that you're on, so not only have you got a chance getting discovered on Twitch, but you are being streamed to other platforms as well, and there are people using those sites and they may discover you there.

Obviously, you’re multiplying your audience because you’re on more platforms, and you’re easier to discover. Now maybe one or two years ago, Twitch was really the only platform where you could stream in hopes of making it your career.

But recently, a lot of other companies have been getting involved – you’ve got Google, who owns YouTube, Microsoft who owns Beam, you’ve got Facebook, Twitter and more that are all getting into the live stream scene, and they all want to help promote your stream, so it's worth considering platforms other than Twitch nowadays.

Add onto that that twitch is probably the hardest platform to get started on, just because there's so many streamers battling to get viewers, whereas services like YouTube gaming have less people streaming to it, so there's more chance of being discovered.

This is good news for people streaming to platforms like YouTube gaming, and is really why we think that Westream is such a great service, because you don't need to know which platform is best for you, because you can stream to all of them at the same time, and then over time you can start to understand where your audience lives, and which platform is best for you to stream too.

Now you might be thinking that Westream sounds great, but how on earth do you monitor chat from Facebook, YouTube, Twitch, Beam and all of these different platforms I want to stream to all the same time?

Thankfully, Westream has thought of a solution for that as well - they have built an app that pulls the chat from all of these streams that you are streaming to into one window.

All-in-all, Westream offers a feature-rich, more effective alternative to simply opting to stream on one platform and give you plenty of options with which to kickstart your gaming career.

The first on our list is the Magewell HDMI - this card is remarkably simple to use, with a simple plug and play setup and a totally lag-free passthrough plank. In addition to its ease of use, it's particularly reliable, promising to not distort sound or drop frames.

It includes separate mic jacks; it does downgrade USB to 1080p however, and it's considered somewhat overpriced, but is still among the great capture cards.

Having a relatively low pricetag and an extremely simple operation, the Mypin 60fps is an exceptional way to conserve your competitors’ humiliation. Only 3 ports make it easy to record your rise to champion.

It's excellent for consoles, and transmits via a superspeed to USB, but there isn’t any in or out jacks for audio.

Next on our list is the Elgato 4K60, a really top-of-the-line card, capable of archiving at resolutions greater than many computers can even think to display. It is, however, incredibly expensive, and is more suited to E-Sports organizations compared looking for capture cards than the average gamer. It boasts an ultra low latency transmission and works with PCIE GPUs.

However, it's unnecessary for most home setups. 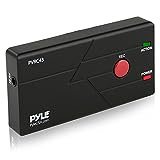 As soon as you've discovered that box of old VHS tapes in the loft, the Pyle Recorder can allow you to digitize them when preparing for conversion, making edits plus storage too. It's incredibly easy to get the hang of, plus it works great with almost anything which includes a standard AV output.

It conserves AVI files directly to an SD card and as a low-cost and specialized device, suitable for playing games. 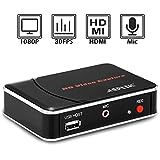 Whether you're trying to record from a classic gaming console or a new one, the AGPtek HD can handle the job. It can handle simultaneous HDMI component and composite links, while coming complete with a remote control to toggle the required input source. It provides one button image captures and allows real time voice comments, too.

However, it's limited to a 2GB maximum file size.

Elgato’s HD60 S enables you to store your best gaming sessions for checking out later, in addition to live streaming them right to the internet using the included USB 3.0 board, and all in stunning 1080p. The second of Elgato’s capture cards is designed to work with Windows 10 and Mac OS Sierra or newer.

It joins up with a USB type C and provides on-the-fly screen design changes, but it lacks a PC free operation.

The AVerMedia HD2 was meant to bridge the gap between your solid desktop rig and huge platforms such as Twitch and YouTube. It allows you to set the compression level for each session, allowing lossless archival using a fast-enough PC.

It supports 60 fps capture and contains live and editing overlay tools. Bear in mind that it requires an open expansion slot.

Moving farther into our capture cards list, this card is an adaptable piece of kit useful to your home setup. Including VGA, RCA and support for components, it is fantastic for creating an archive of great footage. It has an integrated hardware encoder, AV editing software and an easy-to-use remote-controlled assets.

The AVerMedia 2 Plus is meant for hard-core console streamers, who appreciate a razor-sharp image and speedy response times. The instantaneous video passthrough makes it the ideal connection between a PS4 Pro and an HDR prepared 4K TV.

The AverMedia 2 comes built in portable form factor, using an integrated microSD slot; it can record without using a PC as well. 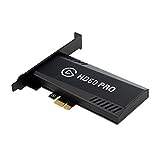 Our top pick is the Elgato HD60 Pro, which joins up to a PCIE slot inside your computer, taking the heat off your CPU when copying and recording video. It gives true HD resolution at 60 Hz, maintaining a fantastic frame rate, complete with marginal motion blur and features different audio and video monitors, in addition to powerful editing software.

It doesn't limit the internal airflow off your system either.

As you can see, there are a great number of excellent capture cards on the market, all ready to harvest the brilliant matches you’re bound to have over the years.

Making sure you get the right one, as well as the appropr​​iate streaming set up, can be the difference between being a bedroom enthusiast, and a pro computer gamer!