Regardless of how you treat your desktop computer, whether it’s a centerpiece of your home office or it’s something that you stuff under the desk, it’s important that you buy the right PC case.

This is especially true if you’re a PC gamer.

At the minimum, you want a chassis with the right dimensions to accommodate all of your components and peripheral devices. For PC gaming, you want a case with features like roomy interiors, lower temperatures, fancy tempered glass panels, RGB lighting, extensive water-cooling support… Okay, I’m getting a little carried away.

With that said, today we will be reviewing a popular gaming PC case, the NZXT H440. We’re big fans of NZXT cases so this should be good.

Before we discuss the features and performance of the H440, let’s first take a look at the general specs of the case straight from the NZXT website.

Much like the H630, the H440 is mostly made of metal – and that includes the front part. One of the first things you’ll notice is the lack of an external optical drive bay. For a case of this size, this is a fairly bold move. Personally, I don’t find such a bay to be necessary but I imagine some people would like to have that option.

For this case, NZXT chose to ditch the bay for optical drives or fan controllers while maximizing space for other components.

The overall design element of the H440 is quite similar to that of the H630 with the steel front panel and plastic frame. We’ve opted for the all-white chassis, which definitely looks striking and clean at the same time. The H440 is available in 8 different color variants.

On the main side panel, you’ll see a nice glass window, which allows you to take a look at the internal components. The window is installed in such a way that it doesn’t show any visible screws or rivets on the outside – just a clean, solid design overall. On the other side, the panel is completely solid.

Since there’s not much to look at the front side, we’ll skip to the rear part of chassis. At the bottom, you’ll find the power supply bay, which features a frame that can be removed to make way for the PSU. Just above the power supply are the 7 motherboard expansion slots covered with individual slot covers. To the right, you’ll see the two holes for water-cooling tubes. From here, you can also see the stock 140 mm fan for pushing air out the back.

Behind the door of the case, there’s the large magnetic dust filter that you can easily remove and re-attach in seconds. On top of the case, you’ll spot the I/O panels that include two USB 2.0 ports, two USB 3.0 ports, and two audio jacks.

To access the internals, you have to remove the left side case door, the one with the window.

This gives you access to the motherboard tray. The tray features a massive cutout, which should be able to accommodate most motherboards in the market, if not all.

The right of the tray can bend at a slight angle and from here, you can see three holes which is used for cable management. The tray is quite roomy and can fit GPUs as long as 305mm with the hard drives installed. If you remove the hard drive, you should have about 406mm of clearance. The H440 also has 180mm of headroom which should be good enough even for oversized coolers.

At the base of the tray sits the integrated power supply shroud, which is used for concealing cables and provides a good amount of space for more cable management. Above the shroud, you can see two SSD trays with cutouts for routing the cables.

The side of the shroud features a large plastic decal with the NZXT brand name on it, the color of which depends on the model. It’s worth mentioning that it lights up whenever the system is active, which is quite cool.

On the other side, there’s not much space between the motherboard tray and the case door. This is quite a drawback since it leaves little room for cable management. However, the aforementioned power supply shroud should have more than enough room to conceal most of the cables, so this not really an issue with the H440.

Behind the mobo tray, you should see a small black PCB that is actually the fan hub. The hub supports ten 3-pin 12v fans, which should add up to a max power rating of 30W. The hub connects to the main power with a single 4-pin Molex power connector. All four of the case fans are pre-connected, so you don’t have to worry about that. Some of them are even zip-tied, which is definitely a nice touch from NZXT.

NZXT also installed an LED hub that controls most of the lights including the front panel I/O and the LED on the PSU shroud. With just a flick of the switch, you can easily turn the LEDs on or off.

The design of the drive cages and bays allow optimal airflow. The only downside is that the area can only hold up to six drivers. Instead of adding more trays, the manufacturer opted to spread them out. Thus, this case is just average when it comes to expansion.

Installation of the motherboard didn’t bear any surprises.

There’s quite a lot of room above the CPU cooler, and the board doesn’t block any of the cable-routing holes. While the case features plenty of room, those who are going to install a 406-mm GPU will have to make use of the tray next to the expansion slot.

Installing the 3.5" drive is also straightforward but make sure you have a screwdriver and screws handy. Simply slide the drive and secure it with the thumbscrews. Installing an SSD works in the same way.

When installing the PSU, you will need to remove the frame and re-fit it again on the power supply itself. The frame is then inserted into the chassis. Unfortunately, if you have a Xigmatek power supply, there’s a good chance that it won’t fit in the opening.

Once everything is installed, the H440 gave a clean and tidy impression. Cable management is more than enough for my needs as most of the cable went into the power supply shroud. Overall, installation was a breeze.

With four stock fans, this mid-tower case didn’t have any trouble with the supply of clean air. Even an overclocked Core i5-3570K shouldn’t be a problem for the NZXT H440.

Even under extreme load, the case managed to keep temperatures under 80°. It’s about average when compared to other PC chassis but we have to say that performance on the H440 is very solid. 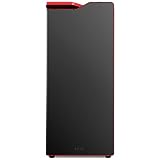 The NZXT H440 offers a lot more when compared to similarly priced chassis like the Corsair Obsidian 450D.

This case has a smarter cable management solution and can accommodate twice as many storage devices, along with other extras like LEDs and a fan hub. It’s also equipped for both air and water cooling, which is impressive for a mid-tower case.

And did we mention that it’s a very good-looking case?

The all-white aesthetics has really grown on me over time. Outfit it with white components and you will have a build that looks like it was assembled by a professional. If white isn’t your thing, there are plenty of colors to choose from like black, red, blue, green, and more.

There are also the limited H440 Hyper Beast (a famous skin design in CS:GO) and the H440 - Designed by Razer, both of which are more expensive.

For reference, here are some of the top alternatives to the NZXT H440 chassis:

The Phanteks Eclipse Series P400S Silent Edition is a case that offers a lot in terms of value.

The build quality is just superior when compared to other mid-range PC chassis. Phanteks has succeeded in making a case that’s suitable for building a straightforward gaming system with a decent liquid-cooling support. By and large, I have to say that it’s a successful attempt.

For such an unbelievable price, you get a chassis with decent looks, solid build quality, and top-notch cable management. The built-in cooling fans are not that many, but there’s still plenty of room for expansion. GPU cooling is quite good too, which is a boon for gamers.

Overall, this is one amazing case that won’t break the bank. 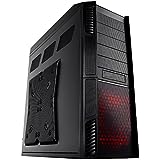 If a mid-tower case like the H440 doesn’t suit your needs, the Rosewill Gaming ATX Full Tower THOR V2 might just be for you.

For roughly the same price as the H440, this product is a solid case with plenty of good features. I know that the case looks dated, but if this is something that you’re not bothered with, this case is an easy recommendation.

It features 6 drive bays and 10 exp ansion slots, which are more than enough even for the more advanced users. It is also pre-installed with a front 2x 120mm blue LED fan, rear 1x 120mm fan, top 1x 140mm blue LED fan (or optional 2x 120/140mm), and side 1x 120mm fan. It also supports liquid-cooling for the enthusiasts out there.

This is a beast of a case in roughly the same price range as the H440. It’s a great case if you’re looking for a Full Tower model.

So would I recommend the NZXT H440 case? Definitely!

This is one of the best mid-tower chassis that you can get in the market. It has a solid build quality, great design, and eye-catching aesthetics. Installing the components into the case is a straightforward affair that left plenty of room for future expansions. If liquid-cooling is your thing, this case won’t disappoint either.

Hopefully, this article has helped you determine if this case is right for you.