Having a tablet is such a luxury.

Before you’ve experienced what the ultimate in portable electronics can offer you, the thought of purchasing a tablet to use in addition to your computer and smartphone seems laughable.

Yet, there is a huge market for the electronics, and it’s easy to see why. This is especially the case with any Windows tablets. Having the Microsoft operating system built in allows you numerous possibilities, most of which are seen when transitioning from one device to another.

The other possibility is to use the tablet as a mini-computer, of sorts. Sure, these windows tablets rarely have enough power to output serious, or truly professional, use, but they’re portable, small, and perform when you need them to. Almost every major computer manufacturer has their own tablet for use with Windows, which can make the choice difficult.

Each design has its own tricks or features that make it stand out, and best provide you with good performance at a solid price.

As with computers, the fact that every big company, such as Dell, Lenovo, or Asus, has their own version. This can make it confusing to purchase a device.

This means you must dive deeper into the tablet itself. Rather than raw performance specs, how does the keyboard feel? What about the screen, how does it look? When pricing out Windows tablets, the simple things are where companies cut corners the most, meaning everything should be tested.

Of course, more functional features like detachable keyboards, rugged looks and well-designed ports all come into play, too. One of the biggest factors in choosing the right table for you is storage space. With a tablet, your sacrificing big numbers such as 256GB for smaller variants like 64 or 128GB SSDs. Something like this doesn’t seem big at first, but can become an issue over time.

Lastly, battery life and any additional peripherals, like a stylus, round out what you should expect to see within this bracket of devices. 2-in-1 tablets are becoming more and more popular every day, and if done right, can completely replace your traditional laptop.

Without further ado, let’s check out the best Windows tablets out now.

One of the biggest challenges for companies when putting out their devices is price.

It’s a game of how much profit can they make versus what people will be willing to play. In the case of the Acer Switch 3, you’ll be surprised at what you get for the $400 it costs for the tablet, stylus, and keyboard cover.

The Acer Switch 3 only comes in one model. It has a gray, metal backing that looks sleek and modern. Along with the looks, it has some great touches like a kickstand and easy access ports. Speaking of, you can use the USB-C port to double as a data and DisplayPort video output plug, providing some versatility when on-the-go.

The display itself is nice. Featuring a 12.2-inch IPS screen that offers full HD resolution means you’ll get true colors and goo viewing angles. The screen does attract fingerprints though, just like the back, so if you’re prone to oily hands it might get frustrating. 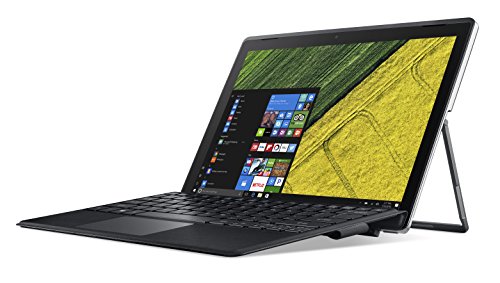 Considering typing on any smaller keyboard can be hard, it’s nice that the typing feel of the keyboard is better than expected. It’s natural, and full-sized, providing everything you’d want from a portable, detachable keyboard. The touchpad also is high-quality, with gestures that are recognized.

The inside of the tablet isn’t going to set the world on fire, powered by Intel’s Pentium N4200 and 4GB of memory. The small amount of 64GB of Hynix eMMC flash storage could be a problem, especially once you’ve considered that Windows itself eats into that number.

One of the biggest downfalls of this tablet is the size, as it’s a full two-pounds without the keyboard, and bigger in comparison to other Windows tablets on this list. That’s not a complete deal breaker, of course, but should be noted.

So, this is a good, overall tablet. It doesn’t do anything, besides the screen, amazing, but everything is solid and performs as expected.

Once you get past it, the Lenovo IdeaPad Miix 520 represents a good blend of premium quality and price, with stellar performance to back it up. Priced at $999, you’ll get the Active Pen 2 included, but no keyboard.

Right from the start you’ll realize that this Lenovo tablet looks the part. Forged from a one-piece aluminum body, the style screams look at me from a distance. It’s thin, and portable enough to bring wherever you go, featuring a compact size of at 0.6 by 11.8 by 8.1 inches. One flaw in the design is the weight, as the Miix 520 comes in at 2.7 pounds, almost as much as a good, slim laptop. Display wise, you’ll find a 12.2-inch screen that features full-HD resolution.

Windows tablets aren’t often the performance junkies that their laptop counterparts are, but this device is very well-equipped. Running with the 8th-generation Intel Core i5-8250 processor and 8GB of memory, you’ll find there isn’t much the Miix 520 can’t do. It also has 256GB of SSD storage, which is considerable for a tablet. It’s hard to find better out-of-the-box specifications than these, so working on the go shouldn’t be an issue for you.

The biggest drawback you’ll notice with this tablet is the battery life. With your standard, ultraportable laptop or tablet, you might be able to push 18 hours of battery on a single charge. With these power-hungry tablets though, the battery number hovers around seven hours. While that still is decent, it’s not the best in its class.

If you can get past that, the IdeaPad Miix 520 delivers on being a great midrange tablet that anyone could use. 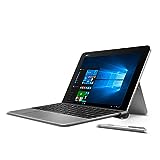 If you don’t require an exuberant number of features or crave the best in performance from Windows tablets, the Asus Transformer Mini may be a great option for you.

It comes complete with a detachable keyboard and stylus, all for less than $400. It won’t win any style awards, but for functionality and quality, the Mini won’t be beat.

To start out, the device itself is small. Measuring in at 0.5 by 10.2 by 6.7 inches, you’ll find it easy to stow in a bag, or even purse. Weighing only 1.2 pounds alone, or a meager 1.75 with the keyboard further backs the notion that it’s a great, on-the-go option. Made from aluminum allow for the body, and a glass screen, it’s easy to understand how Asus shaved weight off. There is, of course, a kickstand as well.

Being so small, you’ll probably guess that the attachable keyboard is tiny, and you’d be correct. While the keyboard cover is easily attached or detached, the keys are close together, making for an uneasy typing experience. It’s fine to use on occasion, but you wouldn’t want to use it for big projects. 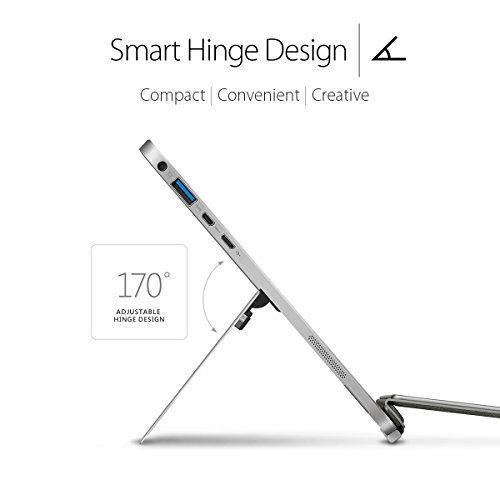 The display is only 1,280-by-800 resolution, which is 720p. While this is standard for most 10-inch tablets, some may be put off by it, seeing as phones have nicer screens than that. It gets bright, though, and colors are natural and true. The other specs that matter include an Intel Atom x5-Z8350 processor, 4GB of memory, and 128GB of eMMC flash storage. All of this is great for this bracket of Windows tablets.

With the Transformer Mini, you’ll get access to a full version of Windows 10 and all its features. This means that Asus could include a fingerprint sensor on the back to take advantage of Windows Hello. Along with this, the battery life is exceptional at over 14 hours’ worth of screen time, allowing for two or three days of use.

The Asus Transformer Mini is the perfect second PC to have around when you just have a few things to do, or want to surf the web on the couch. The good battery life and nice display make it an option for anyone who watches videos wherever they go, and the small tablet is as portable as they come.

The Surface Pro delivers excellent performance, provided you’re willing to throw down on cost. With the standard model, which starts at $700 without the keyboard, you get access to an Intel Core m3 processor, 4GB of memory, and a 128GB SSD. You’ll also get the full edition of Windows 10 Pro, which some people will be happy about.

In terms of measurements, the Surface Pro sets the bar for a slim, lightweight tablet. At 0.3 by 7.9 by 11.5 inches, you’ll be hard pressed to find something easier to carry around. The weight of the m3 processor version comes in at 1.70 pounds. 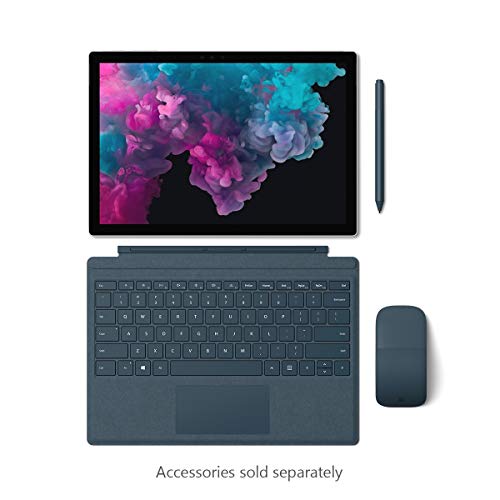 For the screen, you’ll find a crystal-clear display with resolution of 2,736-by-1824, which translates to 267 pixels-per-inch, the highest on our list. Speaking of highest, the 14-hour battery life is also up there with the best for battery performance. The front and rear-facing cameras both can do 1080p video, again the best on our list.

If you’re worried about ports due to the size, rest easy. A full-sized USB 3.0 port is available, along with the microSD card reader, Mini DisplayPort, Surface Connect, and headphone jack. Among the features included, Windows Hello is also present here, albeit with face recognition security software.

All that mentioned, the only drawback, which is clear from the start, is the price.

With less than $800, you could find a very nice Windows laptop. You must consider the fact that neither the keyboard, nor the Surface Pen, are included in that price, too. The advantage to choosing your keyboard is that it comes in colors, but still costs around $140 extra, and the pen retails for about $100. Thankfully, the Surface Pro itself goes on sale, but still, at $900-plus for a machine, it can be a hard pill to swallow.

However, if you’re looking for the best among Windows tablets, you’ll find it difficult to up the Surface Pro. The feature set, performance, and battery life all make it the best one you’ll find. It seems funny that Microsoft has the top Windows tablet, but it’s true.

It’s hard to think that even 10 years ago the thought of a tablet was science-fiction.

Cramming in components that are as powerful, or more, than your standard, low-end computer seemed ludicrous, yet here we are. Windows tablets are being made every day to match performance of laptops alike, and can provide an excellent compromise over one.

Each of the devices on our list represents a different price range and feature bracket, aimed to help you pick the category you’re most comfortable in. Having options makes it easier to see, as well as understand, the differences in tablets.

Sure, while the tablets may not have fancy screens, ultra-high-end performance, or be jam-packed with features, they’ll still perform. This is what matters most when choosing your own tablet, as finding the balance of price to what you need the device to do is key. Keep your eye on the latest from Microsoft, too, with their new Surface GO. It looks to disrupt the 10-inch tablet scene.

It’s no secret that we can find uses for devices such as tablets as their prices continue to drop. As such, finding a new tablet to supplement or replace your laptop can be easy, provided you know what to look for.

Plus, if you don’t need the features, why spend the extra cash?